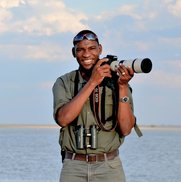 Known to his friends and guests as “Disho”, founder and owner of BUSH LARK SAFAIS, was born in Ngarange village on the banks of the Okavango Pan Handle. Growing up in a remote and rural area, Disho spent his youth hunting and trapping with his two uncles, as is the tradition for young boys in the Hambukushu tribe. Hunting and gathering was Disho’s introduction to the ways of wilderness. Disho, later attended high school in Maun some 400 km south east of his home where he was exposed to a more conservation-based approach to wildlife and wilderness at large.

Disho’s passion lies largely within the world of birds and photography. Having obtained a diploma in Travel and Tourism at college, he soon became involved in the tourism industry as a guide and has followed his passion for wildlife and conservation ever since. 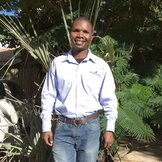 Phetogo is a young man of 34 years of age, who grew up in the Okavango Delta. He grew up between Boro and Xaxaba where his father originates. Phetogo is from a family of professional guides, starting with his grandfather.

He started schooling in Maun and completed his education there. Phetogo started his career as a school teacher, offering physical education at a secondary school, in the year 2004/2005. He actively started his guiding career in 2006.

He worked for Okavango Wilderness Safaris and did his guide training with them and later moved to Andbeyond; where he  was based in lodges. A year later he was moved to their expeditions safaris. Later, He signed a year contract with Great Plains, the following year he joined Letaka safaris, where he did most of the mobile safaris. Phetogo worked for Letaka for four years. After leaving Letaka Safaris at  beginning of 2015, Phetogo started freelancing as a private guide for Bush Lark Safaris and got involved in guide training..

He completed my guiding levels {3} at Okavango Guiding School. He also holds a german speaking level two certificate which he obtained at Goethe Institute in Windhoek. Phetogo is also a Botswana Qualification Authority (BQA) accredited guide trainer and assessor.

His passion for guiding is in his blood; inherited, especially in his interest in birds. Thus making him to be one of the few specialist birding guides in the country. He has been passionately and  enthusiastically  guiding for 13 years now.